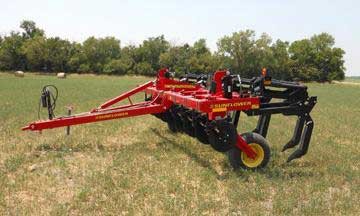 With up to 30-foot working width, new Series offers one of largest in-line rippers available

The 4700 Series in-line rippers are intended for primary fall tillage and are available in three models and five widths. They are built on beefy Sunflower-tough frames, with heavy-duty shanks designed to slice through tough crop residue and deeply penetrate and shatter compacted soils.

“With three models in three styles and five widths, there is a Sunflower 4700 Series in-line ripper to match any farm size and all field conditions,” says Tom Draper, Sunflower seeding and tillage product marketing manager. All are backed by the Sunflower three-year limited warranty.

All three models feature a main frame constructed of strong 4- x 6- x 3/8-inch steel tubing that is cross-braced and gusseted for added rigidity and trouble-free maintenance.

Minimal-disturbance shanks of 1 ¼-inch high-strength, abrasion-resistant steel are spaced at 30-inch intervals. They have a maximum working depth of 20 inches and a 3,500-pound point load for a deep, consistent attack on even the toughest hardpan soils. Shank points are available in 3-inch and 7-inch widths to meet the needs of varying soil moisture conditions.

In addition, optional parabolic shanks with a 3,500-pound point load and a 16-inch operating depth are available in a fixed version with shear bolt protection.

Options for the 4700 Series in-line rippers include front coulter blades to slice residue; wavy coulter row sealer attachments to close the slot created by the ripper shank; disc levelers used with the parabolic shank to close the trench behind the shank and build a berm; and a rolling basket to firm the berm created by the disc leveler coulters. Optional pull-type hitch conversions are available to change three-point frames to pull-type.

The new 4700 Series in-line ripper will be on display at the Farm Progress Show in Boone, Iowa, and at Husker Harvest Days in Grand Island, Nebraska. For more information about these new models and the full line of tillage tools from Sunflower, see your Sunflower equipment dealer or visit www.sunflowermfg.com.

NEWS: Visit AGCOnews.com/na for the latest news and information from AGCO.

Sunflower is a registered trademark of AGCO.

Safe Harbor Statement
Statements which are not historical facts, including expectations regarding the manufacture of equipment, are forward-looking and subject to risks that could cause actual results to differ materially from those suggested by the statements. These risks include possible declines in demand for products as a result of weather, demand and other conditions that impact farm income, actions by producers of competitive products, and the general risks attendant to acquisitions. Further information concerning these and other factors is included in AGCO’s filings with the Securities and Exchange Commission, including its Form 10-K for the year ended December 31, 2011. AGCO disclaims any obligation to update any forward-looking statements except as required by law.